The annual charitable gala dinner of the Germano Chincherini Foundation, now in its ninth edition, has taken place at the Hotel Antares-Olimpo in Letojanni. Mr Germano Chincherini’s achievements as an entrepreneur were commemorated: he built two hotels (Hotel Olimpo in Letojanni, Caesar Palace in Giardini Naxos) in Sicily between 1997 and 2001, along with the existing ones, Hotel Antares in Letojanni and Hotel Ariston in Taormina, and the hotels in Northern Italy (Bardolino, Limone sul Garda and Peschiera del Garda, Lake Garda). The purpose of the event was to raise funds for construction of an orphanage in Kenya, to be rolled out in December 2014.

Then, the orphanages of the Foundation in Kenya will be three: the first one, built in 2008, accommodates 40 children; the second one, inaugurated in 2010, 32; and the third one will give lodging to 64 more children from December 2014.

Mr Pollini, C.E.O. of Parc Hotels Italia, and Mr Marco Borghesi, representative of the Foundation on Lake Garda, attended the dinner, along with 270 guests.

Mr Claudio Dutto, a dentist and a family friend of Mr Germano and Mrs Helena, moved the audience when he projected the images of what he has done in Ukunda for the past three years: he and his team, which counts his daughter as well, have set up a dentist’s treatment room and are now teaching the children how to take care of their teeth. Not only do they treat the children of the orphanages, but they also take care of other children in Ukunda.

During the event, Mrs Renata B. was introduced as well: she will donate a contribution towards the construction of a regulation-size football field, which will be part of the new orphanage in Ukunda. We would like to thank her for her generous donation.

Our munificent suppliers donated many prizes that were raffled off during the event.

The tenth edition of the Foundation’s gala dinner will be held in 2015.

Many thanks to all those who attended the event.
The Chincherini Foundation’s main purpose is to help the underprivileged children of Africa. But the generosity of Mrs Helena, Germano Chincherini’s bereft wife, is even greater than that. She is not only concerned with the problems of her African children: during the evening party, in the presence of Mr Alessandro Costa, the mayor of Letojanni, Mr Eugenio Bonsignore, the deputy mayor, and Mr Antonio Riccobene, representative of the Foundation in Sicily, Mrs Helena gave Fr Pino Gentile, the parish priest of Letojanni, a contribution towards the costs of refurbishment of the façade for the local church consecrated to Saint Joseph. 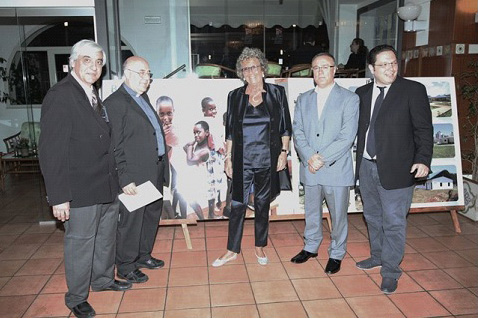