October, 7th 2006: PESCHIERA DEL GARDA: THE AUSTRIAN FORTIFICATION OPENS ITS GATES TO GOLF. A day for golfing through shops and history

Saturday, 7th october, in Peschiera del Garda took place the first and unique golf event open to all lovers and not of this fantastic game.
This golf day was possible thanks to the cooperation of some shops with Golf Club Paradiso del Garda and patronized from Peschiera del Garda town council and its aim was to collect some funds for the Germano Chincherini Foundation, an ONLUS organization which wants to protect and help poor and needy children in the Third World.
In Bettelloni Square, facing the Peschiera harbour, was prepared a blown up driving range, given by the Italian Golf Federation, where all passers-by could try some shots with the help of Golf Club Paradiso pros and in the afternoon from golf player Gianni Brasola. With great surprise of the promoters (Mr. Massimiliano Bisogni, Golf Club Paradiso del Garda director; Mr. Gianluca Golzato, "Giampietro Gioielliere" jewelry owner; Mr. Roberto Verdelli, "Verdelli Abbigliamento" shop owner) the flow to the driving range was very high. Especially kids were less shy than their parents and they had lot of fun trying all kinds of available equipments..
Highlight of the day was during the afternoon, when the final race of the 1st Golf Trophy Città di Peschiera took place. At gate Bastioni Tognon, on Porta Brescia bridge, both residents and tourists followed the challenge among the 30 finalists of the golf race played Sunday 24th September at Golf Club Paradiso del Garda and sponsorized by Giampietro Gioielliere and Verdelli Abbigliamento. The competitors only could use one iron, pitcing-wedge or sand-iron, and had 10 shots to place the ball next to the flag at approx. 90 mts. distance. Easy? Surely it would have been in normal playing conditions, but this location was not a normal playing condition at all! From Porta Brescia bridge players had to concentrate in front of hundreds of people and hit the centre of the floating green located on the fortress canal. The winners in precision and self-control were: The prize ceremony was held at the enchanting Hotel ai Capitani at the presence of the Mayor and of the sport member of the Town Council Peschier del Garda. 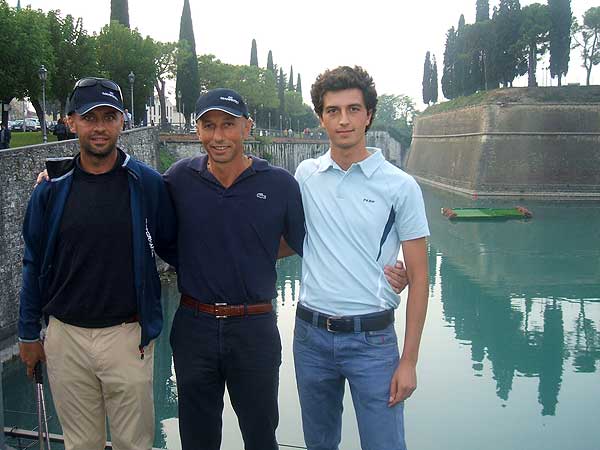