The Foundation is proud to receive the news of the award granted this year by the President of the Republic Sergio Mattarella, to the Dentist Claudio Dutto. He is acknowledgement as one of the thirty "civilian examples" of our country

Since 2010, Dr. Dutto has been working as a volunteer at our orphanages in Kenya, at first he offered to carry out a simple control service, later he has set up and equipped also with the support of some of his collaborators, a real dental consultant surgery, having all the equipment necessary to cure the children.

In order to understand the importance of the job carried out by Dr. Dutto and those who like him offer their medical skills, we must remember that in Kenya the public health system is almost non-existent, lacking structures and equipment. Doctors are badly paid and for this reason, they prefer to work in private.

Who can afford private clinics that have comparable costs to European ones? Obviously a very narrow range of the population, few hundred of thousand people. In a country of 48 million people, more than half live below the poverty threshold.

Having no access to drinking water and good nutrition, the poor are more exposed to illness and are therefore forced to become indebted or more commonly, they must renounce to have medical care. Many of them get sick and die even for trivial illnesses, in their barracks, without ever having met a doctor.

Congratulating Dr. Dutto for the acknowledgment of his work, we report what was announced on the Presidency website on 18 November 2017:

"The President of the Republic, Sergio Mattarella, has granted thirty honors to the Merit of the Italian Republic to citizens who have distinguished themselves for acts of heroism, for their commitment to solidarity, rescue, favoring social inclusion, promoting culture, legality and fight against violence.

President Mattarella has identified, among the many examples in the civil society and institutions, some significant cases of civic engagement, dedication to the common good, and evidence of Republican values.

Here is the list and the reasons for the new awards granted by the Head of State...... 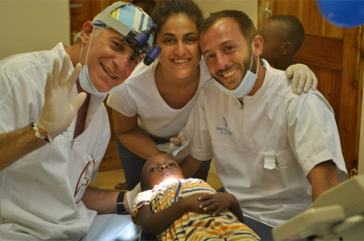 Dr Claudio Dutto is a dentist, active in the Fondazione Germano Chincherini, engaged in African countries, with whom in 2010 in Kenya he created a dental clinic where he offers free medical care to children and teaches them the correct oral hygiene. The project initially consisted in a check-up and education in dental hygiene standards.